A few months ago I was having a conversation with a year 9 pupil at school who told me that he ‘could not do maths’.  I pointed out to him that he was ridiculous, that of course he could do maths, and that almost everything he did involved doing maths. When he walks, he is working out how far to move to legs, the distance, speed, and timings of which to pick up and put down each foot.  When he picks something up, he’s calculating the distance it is away from him, the force of the grip he’ll need, the weight of the object, and the amount of energy required.  All these things he was doing without even thinking about.

This interaction shows us (or at least me) that maths and numbers are important, and a big part of our lives, so it’s no wonder that we often fall into using numbers as our measure for success. 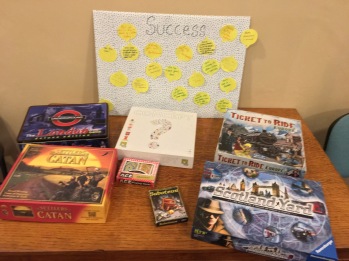 Last month WYWT had the first “event” that we had put together.  It was a board game evening for young people from ages about 10 to 14.

A week or so before, I was feeling good about the games night. We had recruited 8 adults who were going to be there to help out, we’d advertised to specific parents, as well as generally on social media, and we were encouraging both young people and parents to reach out to people who might be interested.  All in all it was looking like it was going to be a very successful event.  I was half right.

A few days later, I found out that several of the young people I was anticipating attending, were unable, or unwilling to, and that despite having 8 people helping to lead the evening, we’d be lucky to have 10 young people.

Before the young people arrived at 7, we gathered the team together at 6:30 for a bit of training.  The training centred on the purpose behind the evening, not to have hundreds of kids show up and give their lives to God, but for young people to come, and for adults to start building relationships with them as a means of sharing faith.  We looked at how to have conversations with young people, and how to ask questions as a means of building trust, and relationship.  When the kids left at 9, we had a debrief session, where we talked through how it had gone, and most importantly, celebrated our successes- not how many young people had shown up, but the things we had learned about the young people.  These were seemingly small things, like the fact that one boy had just got a memory foam mattress, or that one girl played on her school basketball team, but there are the things that will make a difference, and the next time we see these young people, and we can ask specific follow-up questions, will communicate care and interest in them.

That, to me, is success.

In a paragraph: To help teenagers in Woodstock engage in their own faith journey, realise their true identity in Christ, and become leaders through discipleship and mission in the community, combining work from the school, the local churches, and within the community. In a sentence: To help teenagers in Woodstock realise their true identity in Christ through discipleship and mission, and engage them as disciple-makers. In a word: Reproductive-discipleship. View more posts